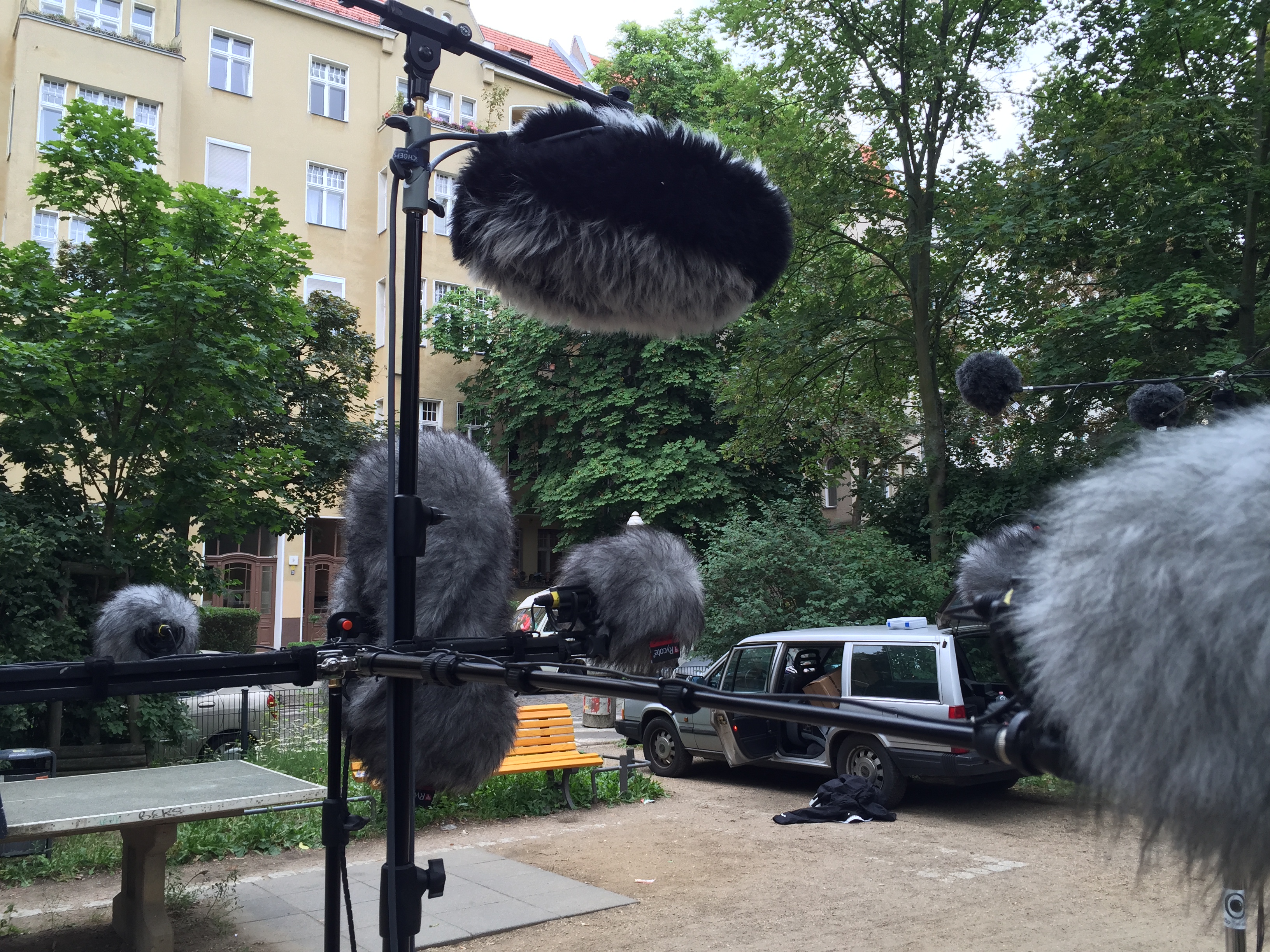 Ambience recordings are a crucial tool for designing acoustical environments and scenographies and thereby transporting emotions, for example in applications as film sound, game sound, VR applications, theatre and radio plays, to name a few.

Most ambience libraries currently available contain stereo recordings or surround ambiences built from stereo recordings; only some are actually recorded using surround microphone techniques. With the advent of playback solutions as Dolby Atmos, standardized speaker setups not only containing more than just two surround channels but also containing ceiling speaker channels have become of interest. The continuing boom of VR/AR/MR/360°-media of all kinds is leading to a raised demand for high quality 3D-audio stock material like eg. ambiences. Especially since sound never is the first concern during principal photography, no matter how much attention a dedicated sound recordist pays to it – there is always the need for material additionally to the location sound to achieve its optimal impact, even when producing documentaries. And while building 3D sound from mono and stereo sources is a valid way to repair, extend and/or replace an existent production sound, it becomes a laborious task when it comes to creating several layers of ambiences per scene as it needs to be done for feature films for example.

Our plan is to fill the gap between demand and supply especially for cinematic ambiences, and so our first aim was to develop a 3D-audio microphone setup that offers a large and stable sweet spot even when played back in large venues as cinemas, as well as proper channel separation especially between the lower and the upper speaker layer, to avoid having sound sources coming from the ceiling that really belong into the lower speaker layer.

In Summer 2016, we compared six 3D-audio microphones or microphone setups in an ambience recording session:

The recordings have been mastered (meaning equalizing the levels, but not equalizing the sound of the different microphones in the test field) at Rotor Film in Potsdam Babelsberg, Germany - one of the largest Dolby Atmos mixing stages in Europe.

Listening Tests:
Since then, three listening tests have been conducted, two of them rather informal (at Rotor Film and at The Post Republic, Berlin, Germany, both with less than ten participants, all working as film sound designers and/or film re-recording mixers) and one being a blind (but not double-blind) test, the latter at Hamburgs University of Applied Sciences' (HAW) Tonlabor during Klingt Gut! Symposium on Sound 2017, involving more than 30 participants. All three tests resulted in an audience preference ranking with the AH-Array perceived as the best system and the two other stereophonic systems with time of arrival differences following (ORTF-3D, Williams/IRT). The First Order Ambisonics microphones were perceived as worse. For more detailed information please see our paper „A New 3D Microphone Array for Cinema, VR and Games – a Comparison“, International Conference on Spatial Audio (ICSA) 2017, Graz, Austria.

A Google Earth shot to give an impression of what the area looks like - please note the Günter-König-sports ground in the Northern West of the recording location, as well as the Urbanstraße in the North and the Hasenheide/Gneisenaustraße in the South of it, the latter including a subway line, all of which you can hear in the recordings. 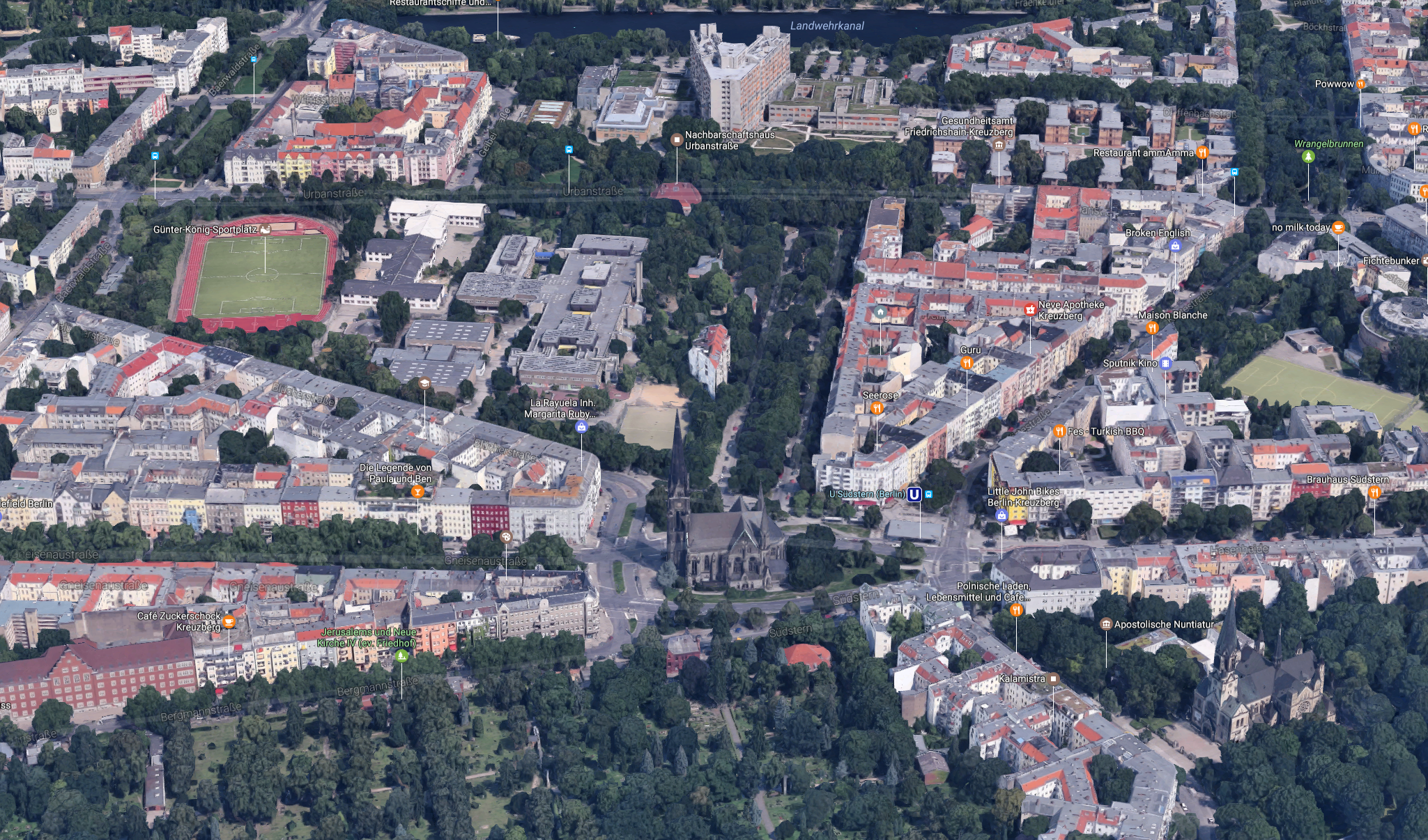 AUDIO Download: this is an edited summary (in terms of summarizing some of the most significant moments of the recordings) of the following microphones or setups:
• Sennheiser Ambeo B-format
• Sennheiser Ambeo rendered
• Core Sound TetraMic B-format
• Core Sound TetraMic rendered
• Schoeps ORTF-3D
• Williams-Star-/IRT-Cross-combination
• Andriessens-Hoffmeister-Array
• one “fake” 3D-ambience track built from the ORTF-3D's lower front L/R-channels as an example of how most of the 3D ambiences are currently built by sound designers and sound editors.

For questions, feedback and suggestions, please feel free to contact This email address is being protected from spambots. You need JavaScript enabled to view it..